Calendar
Classes, Workshops & Events from the Friends of the Living Seed Library

The New Abbo-Regional Seed Project
invites your participation to an engaging group study into the incredible Coevolutionary journey of the flowering plants.

Join Richard Pecoraro and special guests* for 6 eventful and educational gatherings.
Beginning with their geographical origins, we’ll move into the historical events that have  significantly influenced today’s food, medicine and botanical plant movement. By retracing their history we’ll begin to understand the strategies driving current social and industrial trends.  The course is designed to inform us how the development of regional Seed banks and ‘public domain’ Seed Cooperatives are fundamental to gaining ‘Seed Sovereignty’- an “empowering and proactive” position in transforming local food and contemporary plant systems.  Our main intention is to inspire a deeper connection to plant species of all kinds, and to provide a clearer direction for our collective work with them in the world.

We’ll learn about :
-Where the plants of modern day commerce came from (Geographic Origins).
-When and how  the alternative Seed movement began.
-The importance of Botanical gardens past and present .
-A handful of our greatest plant people in history.
-Victory Gardens and independence!
-Plant classification systems past to present:
Ethnobotany to Taxonomy to Phylogeny
-Plant cycles: insights into fertile gardening and diverse plant cultivation.
-Fundamentals of open pollinated Seed Growing.
-How to build a residential seed cooperative.
-Interweaving ritual and artistic expression within the plant “kin”dom

*Individual class themes and layouts will be posted to all participants upon registration.
INVESTMENT: $365 (work trade and sliding scale available)
All proceeds go to the development of the
New Abbo-Regional Seed Project
Classes limited to 25 people.

CONTACT ABBOREGIONAL@GMAIL.COM
*special guests: if you would like to participate as a special guest, please choose from the subjects above, and how you’d like to present. A simple description on your background in that chosen area is required. Presentations are limited from 30- 60 minutes.
July 7th Seed Saving Workshop
RICH PECORARO North Boulder
9am to 4pm at Tara 19th and sumac 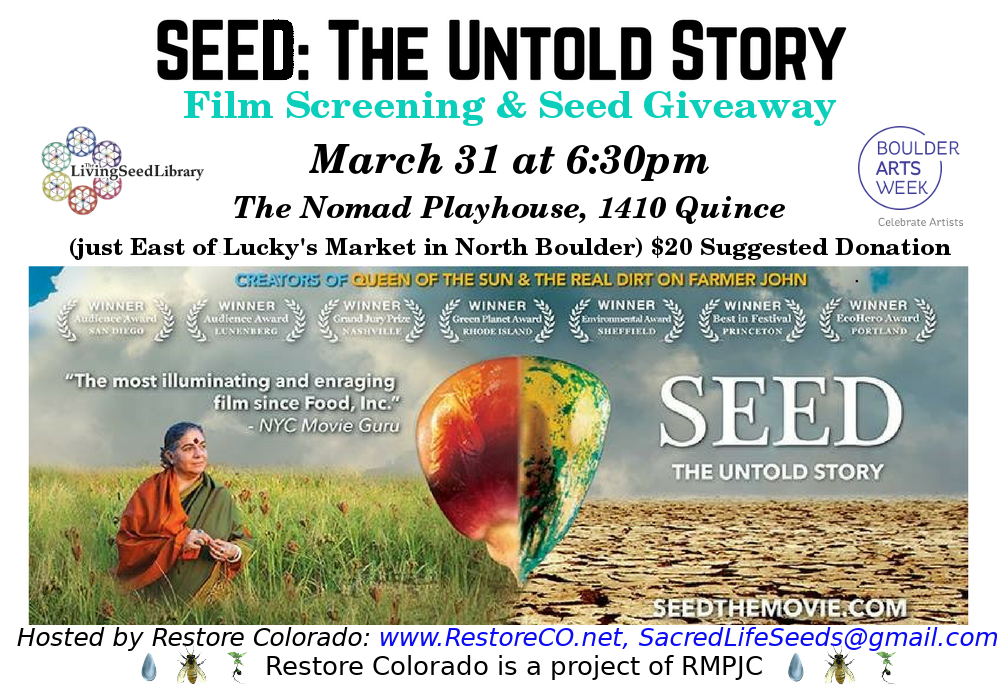 Our past events included...